Twenty-five percent of all 32-week pregnancies have the child in the breech position. This number drops to three-percent at 40-weeks. 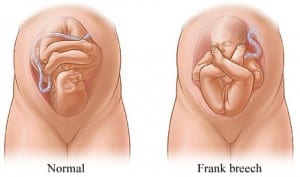 The breech position is one in which the baby’s feet or buttocks are lower in the uterus and positioned to be delivered first. Usually, breech positioned babies move to the ideal head down position two to four weeks prior to reaching full gestational age. If the child does not move to the ideal normal delivery position, it is usually wise to attempt to reposition the child as breech deliveries have inherently more risks and complications.

There are three different types of breech presentations:

A common question we receive from pregnant patients is if a chiropractor can help with their breech baby. The answer is absolutely, yes! In fact, a study published in the Journal of Manipulative and Physiological Therapeutics showed an 82% success rate for specially trained chiropractors turning breech babies head-down.

As Evansville’s pregnancy and breech baby chiropractors, I use the same gentle, research-tested approach: the Webster Technique. Developed by Larry Webster, D.C. of the International Chiropractic Pediatric Association, the Webster technique is “a specific chiropractic analysis and adjustment that reduces interference to the nerve system and balances maternal pelvic muscles and ligaments. This, in turn, reduces torsion in the uterus, a cause of intra-uterine constraint of the baby and allows for optimal fetal positioning in preparation for birth.”

In addition to this specific form of chiropractic care, acupuncture may be used if the Webster Technique alone is not turning the child. Acupuncture has also proven in multiple research trials to be very effective in restoring a normal birth position.

When should I see a breech baby chiropractor?

If you are in your 32nd week of pregnancy and have a breech baby, chances are your child will turn on their own as the weight of their head increases. However, if the child has not turned by the 34th week, you should, of course, consult your obstetrician and/or midwife but also contact our office. We can help!

August 15, 2018/by Eric Mitz
TMJ Exercises Helped TMJ Syndrome More Than TMJ Splints“Why Does My Back Hurt?” – Top Causes of Back Pain, Part One
Scroll to top